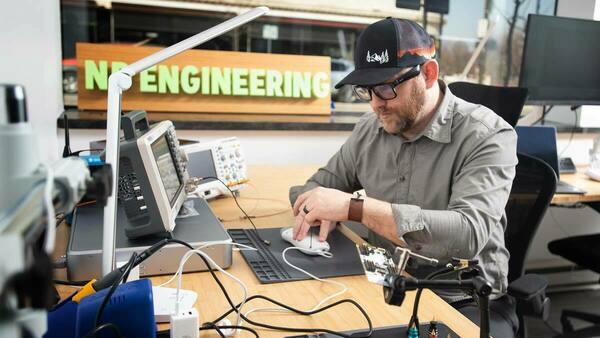 When electrical engineering Ph.D. students Roy Stillwell and Vince Kitsmiller were writing mock grant proposals for their biophotonics class, little did they realize that one of the ideas they were pitching would lead to a promising start-up.

Their idea was to build a handheld medical imaging device that would use near-infrared spectroscopy (laser light) rather than X-rays.

Initially, Stillwell wasn’t sure the idea was feasible, but, with the mentorship of his advisor, Thomas O’Sullivan, and the support of his lab, the device evolved from idea to reality. Now Stillwell is CEO of NearWave, the company making the device.

The first prototypes of the NearWave Imager — a safe, non-invasive imaging device for breast cancer detection and monitoring — will be used in clinical settings at a local hospital this month. The device measures blood, lipids, and water up to 3 cm deep in tissue and wirelessly transmits data to a mobile device or laptop.

“This advanced near-infrared technology has been around for 30 years now, but mainly in the hands of physicists and engineers in their labs,” said O’Sullivan.

“It was thought just too difficult to use. But Roy wanted to take the leap. He thought there was no reason why this couldn’t be made easy to use and intuitive for a doctor to pick up and start scanning. It’s become Roy’s Ph.D. project, and now he’s head of the company.”

The NearWave Imager will help physicians evaluate the effectiveness of breast cancer treatments by monitoring changes in tumors.

“With this device, you don’t need to wait for eight weeks of chemotherapy to find out that a tumor’s not responding,” said O’Sullivan. “You can know within a week or even days if the tumor is shrinking.”

While NearWave’s primary purpose at this stage is detecting and monitoring breast cancer, other potential future uses may include neonatal care (safely monitoring brain function); detecting of other types of cancer in children and adults (thyroid, colorectal, osteosarcomas); and even giving athletes a means to monitor oxygen levels in their muscle.

Success has followed success for the new company. In 2017, a student grant from the Harper Cancer Research Institute Research-like-a-Champion program kickstarted the project. Stillwell and his team then won the McCloskey New Venture Competition for the device; the Mira Award for Innovation of the Year, 2021; and, in January 2022, the Pay it Forward Prize from the Arizona State University eSeed Challenge.

Most recently, NearWave has been accepted into Y Combinator, a leading startup accelerator.