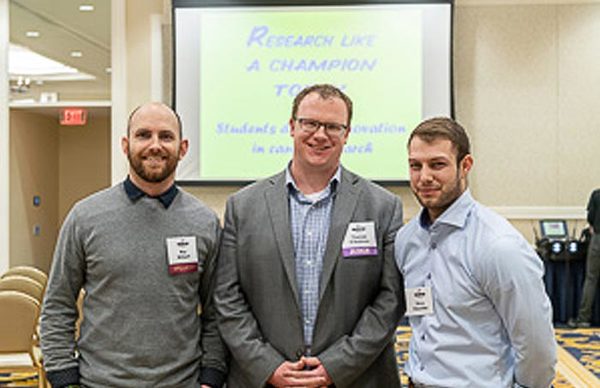 Is there a better way to detect breast cancer in women under 40? Department of Electrical Engineering (EE) graduate students, Vincent Kitsmiller and Roy Stillwell may have found it. Kitsmiller, specializing in biophotoinics and Stillwell, specializing in embedded systems, under the advising of professor Thomas O’Sullivan, are researching diffuse optics spectroscopy (DOS) and how it characterizes breast tissue. Their separate research efforts have led them to team up to fabricate a hand-held, low-cost medical imaging device that can measure breast density in a portable, non-invasive and cheap way.

This technology does not provide screening (such as mammography) but rather risk assessment. High breast density, in addition to being a significant independent risk factor for breast cancer, also diminishes the sensitivity of mammograms. The later reason is why there is debate about when is the best age to start routine mammography screening. “It’s hard to use mammography in women under 40 because their breast tissue is typically too dense. Any mammography is going to be inconclusive,” explained Kitsmiller. “DOS allows us to get information that is totally different from that which you would get from a mammogram or ultrasound.” DOS has the potential to measure breast density and personalize a young woman’s screening schedule based on her individual calculated risk of breast cancer. In addition, data has shown that DOS can allow doctors to see through the dense tissue. This can potentially significantly reduce unnecessary, painful, and anxiety-inducing breast biopsies.

“We can get this into the hands of a lot of doctors because it’s inexpensive,” said Kitsmiller. This assessment can be added to a regular annual physical as a means of early detection, of men and women of all ages. If a patient has several risk factors for breast cancer working against them, those factors could put them into a high-risk category of patients that are eligible for a screening (such as MRI) that otherwise wouldn’t. MRI scans are very expensive therefore, insurance companies are not going to pay for screening the general population. DOS has the potential to save patient lives by allowing for another layer of assessment and, if conclusive, makes a strong case to the insurance companies that further testing is crucial.

The pair recently took their research to the Harper Cancer Research Institute’s “Research Like a Champion” grant competition and won. “Everyone can get involved in the crusade to cure cancer – including electrical engineers. Harper recognizes that it’s going to take minds from many different disciplines to fight this battle,” said O’Sullivan. The team won round one this past fall, which awarded them $12K. That grant allowed them to start to build their hardware. Now, with the $20K grant they were awarded this spring, they can finish the hardware and further test on human cancer patients. “I’m particularly interested in this, because my mother had breast cancer. She’s been in remission for two and a half years,” said Stillwell. He works under the advising of EE professor Patrick Fay.

Their device will also have the ability to monitor the effectiveness of chemotherapy drugs in patients who undergo chemotherapy before surgery, without the use of harmful radiation. “It’s just light, sunlight is actually more harmful,” said Kitsmiller. Patients and doctors will be able to get answers right away to know if the chemotherapy is working. This could potentially be a huge step forward for cancer patients and the doctors treating them.

The device can image in real-time, similar to that of an ultrasound and stream results directly to a computer or mobile device. This means instant results for doctors and patients. Stillwell explains, “It has a computer (processor) built into it, as well as logic that provides real-time images at video frame rates. It initiates a signal, that signal goes directly to a sensor, lasers go through the tissue to capture the chromophores and then that information is displayed on a screen.”

At this point in the project, the team is finishing integrating and then testing the device as well as developing the interface. In time, if testing proves successful, they hope to move forward to partner with the IDEA Center to get it into the medical community.