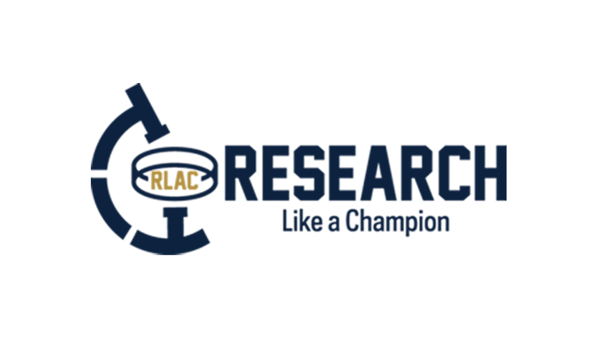 Meet some of the players fighting to cure cancer with Notre Dame and the Harper Cancer Research Institute’s relatively new program — Research Like a Champion.

These students aren’t only scientists — they’re engineers; they’re philosophers; they could be anybody who’s thought of a new way to attack cancer.

The opportunity to explore these ideas is all thanks to one benefactor with the simple belief that by collaborating, Notre Dame students can find a cure.

“To research like a champion is going above and beyond the normal everyday work to do something sort of extraordinary,” said one RLAC award recipient, and engineering graduate student Roy Stillwell.

Their extraordinary project is curing cancer.

Nearly every participant said they have been personally affected by cancer.

“It’s my dad … He passed away when he’s the same age that I am now, so it’s been a long time,” said Sharon Stack, the Anne F. Dunne and Elizabeth Riley Director of the Harper Cancer Research Institute.

“I’m particularly interested in this, because my mother had breast cancer. She’s been in remission for two and a half years,” said Stillwell.

“My wife is a breast cancer survivor… She was diagnosed just a couple months before we were married,” said Tom O’Sullivan, assistant professor of electrical engineering at Notre Dame.

“My dad was diagnosed with leukemia when I was in eighth grade. 15 years now, he’s been in remission, so he beat it,” said Huynh.

We’re featuring four groups fighting in their fields to beat cancer once and for all:
•    Biology
•    Bioimaging
•    Electrical Engineering 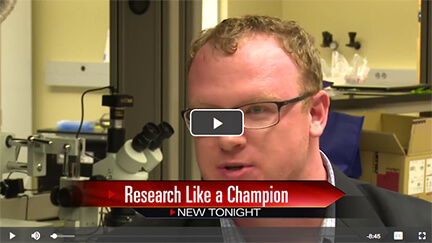 “The Research Like a Champion program came about due to a benefactor. It was his idea, and what he thought was wouldn’t it be great to involve students in not just doing the cancer research but coming up with the project ideas?” said Stack.

“Students are so innovative. They’re very technology driven. They don’t have pre-conceived notions. They want to do good things. They might be the weirdest ideas that you ever heard, and if one or two of them or ten of them work, then we’re all better off for it,” she said.

“What research like a champion means to me is striving to be the best that you can be and trying to push the envelope and trying to figure out the next step and what’s coming next and being on the cutting edge of research and kind of anticipating what’s going to be needed in the future,” said one RLAC award recipient, Jessica Lukowski.

Lukowski and her partner, Kristen Johnson, are on the cutting edge of making cancer treatment more comfortable for patients, by better controlling which cells chemotherapy attacks.

“Most of my Ph.D. work is not focused on cancer, but we study protein-lipid interactions in the Stahelin lab, and after talking to members of the Hummond lab, like Jessica, we realized that together our collaboration can further our research in targeting cancer cells with chemotherapeutics,” said Johnson.

While Lukowski and Johnson join forces to curb chemo’s side-effects, upstairs, another student researcher is trying to figure out why our own bodies help cancer cells spread.

“The problem with cancer research it’s very complicated. Cancer itself is not one disease. It’s an umbrella that covers many diseases. They are different. They share common characteristics, but they are different and require different treatments and different strategies, so this makes it very complicated, and research like a champion, you’re trying to be more precise and target a question or target a way to treat this cancer instead of like getting lost in all these small details,” said Asem.

Asem traveled all the way from Egypt to target ovarian cancer cells.
“Cancer cells manage to form tubes and tunnels with normal and healthy tissues and cells around the body, so I’m trying to understand in my projects why healthy tissues and healthy cells contribute to this process and how it happens and how can we stop it to make cancer cells more vulnerable to our treatment,” she said.

One engineering team hopes to guide that treatment with the medical device they’re developing.

The goal is to do that with a low-cost portable medical imaging device.
“Our particular specialty is using light to interrogate tissue to study tumors and ultimately to hopefully use that as a tool that doctors can use to help diagnose,” said O’Sullivan, Kitsmiller’s mentor.

“We look at the response of that light to the breast tissue, so if we can use our system to measure these breast densities in a portable, cheap way, then potentially we can use it as a mechanism to determine whether somebody is at a higher risk for breast cancer,” said Kitsmiller.

“It’s probably strange to think you got a group of electrical engineers working on breast cancer, and that’s one of the very unique things about the Harper Cancer Research Institute in particular is that they’ve really fully embraced a notion that I believe is that it’s going to take many different viewpoints, many people coming from different disciplines to contribute to such a seemingly insurmountable problem like curing cancer,” said O’Sullivan.

“The magic of the Research Like a Champion program is that it is student-led, student-driven,” said Huynh.

One undergraduate student is driving toward printing living tissue — seemingly like magic.

“Research Like a Champion provides me with a platform to do research that is quite innovative that will impact a broad number of people in cancer research,” said the student, Lord Boachie.

“One of the problems is that all those drug testing techniques, happens on models and 2D monolayers, so they just have a bunch of cells and the put it on a plate and just test different drugs on it, but the thing is the human environment is totally different … and so doing bio-printing, we’re able to print living tissues and cells that’s kind of representative of the human physiological environment,” he said.

“Once the cancer research gets to the clinical stage, about 8% do work, so when we’re bioprinting, we’re going from 8% to more than 50%, so the margin is quite wide,” Boachie followed.

“Anybody who hears the name Research Like a Champion, I hope that’s the message they get, that our students are being a force for good,” said Huynh.

To learn more about each student’s project, click on the web exclusive video above.

The 2017-18 school year marks the first time Harper is accepting applications in the fall as well as the spring.

The deadline to apply is October 2.